Diabetes is characterized by uncontrolled elevated blood glucose levels and affects close to 400 million people worldwide. Dysfunction to insulin-secreting β-cells within the islets of Langerhans in the pancreas is the common cause of most forms of diabetes. To treat and cure diabetes strategies broadly aim to restore or replace the dysfunctional pancreatic islets to provide a well-regulated source of insulin secretion. However,  current treatments are not cures and patients are still at increased risk from chronic diabetic complications, including kidney failure, cardiovascular diseases, blindness and limb amputations, as well as hypoglycemia that can cause coma and death. Our lab's research involves understanding how the pancreatic islet functions, how the islet becomes disrupted during the development of diabetes. and how we can monitor this function and dysfunction using imaging approaches. With this, we hope to improve both clinical diagnosis and therapeutic treatments for patients with type 1 and type 2 diabetes, as well as rarer monogenic diabetes.

The islet is not simply a collection of cells acting autonomously. Rather, complex cellular interactions are necessary for the regulation of insulin secretion. Further insulin secreting beta cells are functionally heterogeneous. One of our main areas of research is to understand how interactions between heterogeneous cells within the islet control the dynamics and regulation of insulin secretion.
Imaging beta cell electrical networks. Beta cells are coupled by electrical synapses (gap junction channels) which coordinates electrical activity and insulin secretion dynamics. We employ high speed Ca2+ imaging and signal processing to examine the organization of electrical communication in the islet and how it changes in conditions such as aging and diabetes. 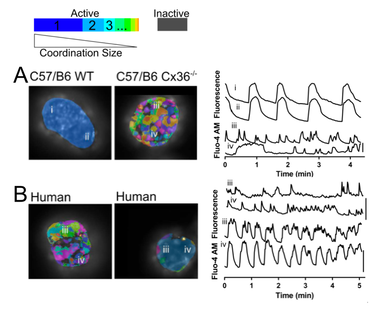 Fig. 1. Imaging Mouse and Human islets  [Ca2+] activity and coordination:
A: Representative false color map of [Ca2+] activity and coordination in C57/B6 WT and Cx36ko islets (left) with time courses from four individual cells (i–iv) indicated in these islets (right). [Ca2+] activity is represented by presence of false color, with each color representing a separate region of [Ca2+] coordination, as indicated in legend above.
B: Representative [Ca2+] activity and coordination maps in human islets from donors where either low coordination or high coordination  is observed (left), with time courses from individual cells indicated in these islets (right).
Sub-populations of beta cells and islet 'pacemakers'. Beta cells are functionally heterogeneous, displaying wide-ranging glucose responsiveness, patterns of electrical activity and levels of insulin release. We are employing analysis of [Ca2+] dynamics, optogenetics and fluorescent indicators to identify different subpopulations of beta cells and characterize how they regulate islet function. This includes a sub-population that disproportionately coordinates and drives the elevation of first phase insulin release (first-responders) and and separate 'pacemaker' like sub-populations that entrains oscillatory dynamics. 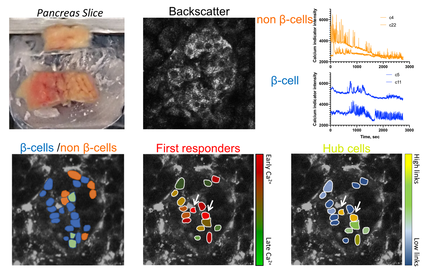 Fig. 3. Work flow identifying functional sub-popualtions in human islets insitu:
Top: Live pancreas slices are taken from human pancreas tissue obtained from surgical or donor cases.  Islets are identified via backscatter, Calcium dye is loaded and time courses imaged, enabling putative beta cells and non-beta cells to initially be identified (subsequently verified) .
Bottom: [Ca2+] dynamics in beta cells are analyzed to identify first responder cells and hub cells. In human islets there appear to overlap, unlike in mouse.
Computational models of islet function. We use computational models to understand how the structure of the islet impacts function under different stimulatory conditions. We also test how mutations linked to diabetes can impact islet dynamics and function.
Future Goals. Key questions we seek to answer in the future include:
-What molecular factors determine first-responder cells and other functional subpopulations of beta cells
-What is the temporal evolution of beta cell heterogeneity and functional sub-populations under healthy conditions and in diabetes
-How do interactions with other endocrine cells influence functional heterogeneity within the islet

Type 2 Diabetes. Type 2 diabetes (T2D) is a complex multi-factorial disease, where β-cells in the islets of Langerhans fail to secrete sufficient insulin to control blood glucose following metabolic stress, such as obesity. However, not all individuals who are obese develop T2D, and the mechanisms of islet dysfunction that lead to some individuals developing T2D in the face of insulin resistance, while others are able to compensate for insulin resistance, are poorly understood. We are examining aspects of islet function that are disrupted early in diabetes progression to discover new and novel ways of preserving β-cell function and islet mass.​ A key focus has been gap junction channels that form electrical synapses that electrically couple beta cells.

Regulation of islet electrical synapses (gap junction channels). The ability of β-cells to interact to promote the regulation and dynamics of insulin secretion is disrupted in the early stages of Type2 diabetes. We are investigating mechanisms that mediate the disruption of gap junction formation that prevent β-cell communication. This includes measuring trafficking and membrane organization with photoswitchable fluorescent reporters and super-resolution imaging (STED). We have also found that connexin36 is phosphorylated under conditions associated with diabetes. We have developed c-terminal mimetic peptides that can block this phosphorylation and that can rescue coordination of electrical activity and regulation of insulin secretion. 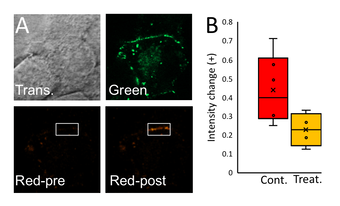 ​Fig. 5. Measurement of connexin trafficking in beta cells using photoswitchable fluorescent proteins:
A: Images of Cx36-Dendra in beta cells, with green channel showing all labelling Cx36, and red channel showing photo-activated sub-region where subsequent trafficking can be measured.
B: Transfer of Cx36-Dendra from sub-membrane space to membrane under control conditions and under conditions that reduce microtubule trafficking

​Fig. 6. A Cx36 peptide mimetic prevents phosphorylation and downregulation of Cx36 gap junction coupling:
A: Schematic of S293 Cx36 c-terminal mimetic where portion of c-terminal region is joined with an internalizing peptide..
B: [Ca2+] dynamics in beta cells following treatment with pro-inflammatory cytokines with scrambled control or S293 peptide. Note recovery of normal dynamics with S293 peptide.
Excitability-dependent gap junction remodelling. We have found that the increase in beta cell electrical activity and [Ca2+] upon glucose stimulation regulates the expression of GJD2, encoding Cx36. This implies the excitability of the beta cell regulates its functional integration with the rest of the islet. We are currently investigating how GJD2 transcription is regulated and the role of Ca2+ -dependent transcription factors.

​Fig. 7. [Ca2+]-dependent GJD2 (Cx36) expression:
A: [Ca2+] is stimulated by glucose, but silent when hyperpolarized as a result of KATP opening.
B: Gene expression changes  upon these conditions, of the connexins expressed within the islet. GJD2 (Cx36) is modulated by glucose, hyperpolarization and CaN-NFAT signalling
Future Goals. Key questions we seek to answer in the future include:
-What factors regulate the trafficking of connexins to and from the plasma membrane  in beta cells and how is this altered in diabetes
-What factors regulate the assembly of Cx36 gap junction plaques within beta cells
-How is the transcription of GJD2 (encoding Cx36) regulated by [Ca2+] levels and dynamics

For most patients with Type1 diabetes (T1D), there is an asymptomatic phase of several years prior to clinical presentation of diabetes, where insulin secretion and glucose homeostasis are normal but immunological abnormalities are present . This asymptomatic phase of T1D diabetes presents an opportunity for early therapeutic intervention to preserve β-cell​ mass and prevent T1D diabetes. However there are limited approaches for reliable diagnosis and tracking of disease progression during this asymptomatic phase, as well as for monitoring disease reversal following preventative treatments. The islet microvasculature undergoes significant remodeling during T1D. We are developing approaches involving microbubble ultrasound contrast agents for tracking T1D  progression and therapeutic prevention.

​Fig. 8. Islet microvascular remodelling in type 1 diabetes.:
A: Immunofluorescence image of vasculature within an islet. Note denser vasculature in islet (dotted) than surrounding exocrine tissue.
B: Destruction reperfusion protocol using contrast-enhanced ultrasound. Bubbles are infused leading to an increase in contrast signal (green) relative to tissue signal (grey). A high MI pulse destroys (ablates) bubbles, which then wash in during tissue perfusion, leading to signal recovery.
C: Signal recovery in pancreas. Rate of recovery related to flow velocity.
​Ultrasound measurements of islet microvascular permeability in type 1 diabetes.   The islet microvascular becomes more 'leaky' during the progression of type 1 diabetes, and this occurs in both mouse models and human type 1 diabetes. We have used novel sub-micron sized ultrasound contrast agents that extravasate and accumulate within the islet microenvironment to measure this leakiness. Measurements of microvascular permeability can predict both the rapid progression to diabetes and success of therapeutic prevention of diabetes. We are also testing whether sub-micron contrast agents can serve as image-guided drug delivery vehicles.

Fig. 9. Detecting islet microvascular permeability allows detection of insulitis and predicts type 1 diabetes progression:
A: Schematic of approach whereby sub-micron sized nanobubbles and infused and accumulate within the immune infiltrated islet.
B: Detection of nanobubbles in immune infiltrated islets, via histological analysis (top) and via contrast enhanced ultrasound (bottom).
C: Prediction of rapid diabetes progression in NOD mice with high pancreas nanobubble accumulation,  as indicated by high contrast within the pancreas.
​Novel ultrasound contrast agents for tracking type 1 diabetes progression.   The development of new ultrasound contrast agents is a lively field. We are utilizing a number of novel agents to enhance the sensitivity and specificity of detecting insulitis and tracking type1 diabetes. We have had success utilizing phase change contrast agents that serve as circulating microbubble precursors that can be 'activated' by an acoustic beam. We are also testing whether molecularly-targeted contrast agents provide enhanced specificity for disease detection and tracking. 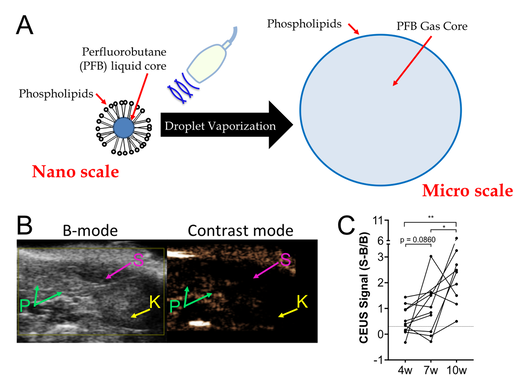